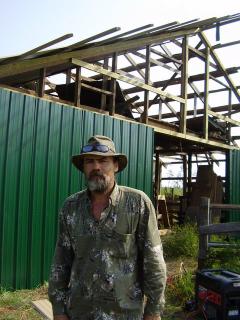 This is Scott Griffin who is quite an individualist and barn builder. He looks pretty mean and he can get suddenly descriptive about things he does not like, like stupid rich people, or stupid poor people or stupid game wardens or stupid photographers --- well about anything stupid -- so the "mean" image tends to stick. But, he's not all that mean. He helped me rebuild the barn - at a reasonable price too.
This photo was from early September. Recently he was adding some finishing touches and was called over to my Aunt and Uncles house nearby, to help recover poor old Uncle Lamar. Lamar has alzhiemers and had fallen down outside. My Aunt and cousin could not get him back into his wheelchair and with cuts he needed to be taken to the hospital (which they had just come back from). Good thing Scott was there to help. He is ugly and he is mean (or wants you to think he is), but he has a good heart. Scott told me that my dad, J. Lee, (Dad died about two years ago) used to treat him just like he was a real person. Go figure!