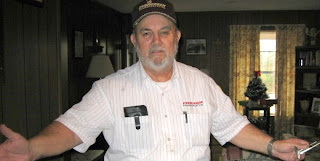 Irene Josephine O'Barr, age 72, went home to be with the Lord on Wednesday, June 18, 2008. She was born in Chumuckla, FL on September 23, 1935 and had resided in Jay, FL for the past 35 years. Irene was preceded in death by her parents, Ida and Dade Hopkins and by her husband of 19 years, Cullen O'Barr. She was a loving wife and a wonderful mother to her children.
Irene is survived by her 6 children: Teresa Harris of Clarksville, TN; Jimmy Everage (and Janice) of Ponce De Leon, FL; Elaine Shamloo of Pensacola, FL; Joe Everage of Jay, FL; Sandy Paronto (and Reid) of FT. Myers, FL; and Nell Hendricks (and Howard) of Jay, FL. Sisters: Shirley Taylor (and Carroll) of Abbeville, AL; Mable Smith of Jay, FL; Virginia Sessions (and Ray) of Jay, FL; Minnie Story (and Wayne) of Jay, FL; 12 grand children; 15 great grandchildren and numerous nieces, nephews and friends.
Visitation will be on Friday, June 20, 2008 from 5:00 - 8:00 pm at Jay Funeral Home. Funeral services will be held Saturday, June 21, 2008, 3:00 pm at Mt. Carmel Methodist Church, Jay, FL, with Brother Fred Funches officiating.
Pallbearers will be Howard Hendricks, Reid Paronto, Jim Emmett, Greg Dykes, Larry Bates and Charles East.
Special thanks to Covenant Hospice and especially Sue Wilkinson and Kathy Paxton for their loving care.
Jay Funeral Home is in charge of the arrangements.
"Mother"

Her children arise and call her blessed. Many women do noble things, but you surpassed them all, Lord give her the rewards she earned and let her works bring her praise at the heavenly gates.
Proverbs 31

Details emerge in collision that killed 3

Two cousins and a Santa Rosa County man were killed over the weekend in a two-vehicle accident.

Louvina Rutledge, 17, of Pace and her cousin, Michael Rutledge, 19, of Mobile were in a car that collided with a sport utility vehicle on Chumuckla Highway in Santa Rosa County.

The driver of the Ford SUV was Leonard Lail, 65.

The accident was reported at 5:10 p.m., just north of Mineral Springs Road.

Lail, a semi-retired brick mason, left his home in the New York community in Santa Rosa County to go the Piggly Wiggly in Flomaton, Ala., said Doyle Godwin, 45, Lail's stepson.

The SUV was headed north on Chumuckla Highway, and the Kia, driven by Louvina Rutledge, was heading south.

The Kia went off the road, and the driver overcorrected, the Florida Highway Patrol said.

The Kia then began to spin and went into the northbound lane, FHP said.

The driver of the Ford swerved in an attempt to avoid a collision, FHP said.

Godwin said he was fishing when he received a call from a friend about the accident.

He said he immediately went to get his mother, Peggy Lail, and they drove to the scene.

"It was pretty rough," Godwin said. "It was probably the worst accident I've ever seen."

Godwin said he and his mother left the crash scene after a state trooper asked him to take his mother home.

He said a trooper later came to his mother's home and confirmed his stepfather had died.

"They are all going to love and miss him," Godwin said.

The Rutledge family could not be reached for comment Sunday evening.
Posted by Cynthia at 6/16/2008 No comments:

Leonard "Ronnie" Lail, age 65, of Jay went to be with his Heavenly Father on June 7, 2008. Ronnie was born on May 1, 1943 to the late Robert and Mary Lail in Dayton, Ohio. During early childhood, his family moved to the Chumuckla area. Early adulthood took Ronnie to the Lake Wales area where he worked in the citrus industry. Ronnie was affectionately known as "Pawpaw" and was the star that shined the brightest to his wife, children and grandchildren. He was a loving husband, father, Paw Paw, and brother. A day never passed without a smile on his face. A new friend was nevermore than a hug or handshake away. Ronnie proudly served his Lord with all his heart. Ronnie discovered the power of his Lord and Savior in 2001, and became a member of New Bethel Baptist Church. Later on he was appointed deacon of the church as well. Knowing the relationship he had with his Lord made him the proudest.
He was preceded in death by his parents, Robert and Mary Lail.
He is survived by his loving wife of 35 years, Peggy Lail; sons, Ronald Lail, Chris Lail, Doug (Karen) Godwin, and Doyle (Donna) Godwin; daughter, Tammy Denise Enfinger (Joe Cook); grandchildren, Derek Enfinger, Alesia Enfinger, Seth Lail, Mason Lail, Bobby Wood, Jake Godwin, Blake Godwin, Justin Godwin, Rachel Scott, and Haily VvAao; brothers, Robert Lail, Kenneth Lail, Donnie Lail, and Richard Lail; sisters, Jane Salter, Bernice Gay, Joyce Courtney, and Shirley Barlow and a host of nieces, nephews, and close friends.
Funeral services will be held on Thursday, June 12 at 2:00 p.m. at New Bethel Baptist Church. A visitation will be held on Wednesday, June 11, 2008 from 6-9 p.m. at Jay Funeral Home. Reverend Joe Digmon and Reverend George Dunn will officiate services. Burial will follow at Pine Level Baptist Church Cemetery.
Active pallbearers will be Daniel Madden, Jonathon Scott, Matt Murphy, Zane Burkhead, Jerome Lail, and Lewis Lail.
Honorary pallbearers will be Jimmy Arnette, Preston Tucker, Clayton Stewart, Wayne Polk, Ricky Godwin, Daryl Paul, Wilbur Weeks, and Jamie Sanders.
JAY FUNERAL HOME is in charge of arrangements.
Published in the Pensacola News Journal on 6/10/2008.
Posted by Cynthia at 6/16/2008 No comments:

Kid in Chumuckla Gets Famous

A great story about a 7th Grader at Chumuckla. He gets featured on TV!
PNJ - YOUNG HUNTER GETS SHOT OF A LIFETIME
Posted by BUZZ CREEK at 6/11/2008 No comments: