Saturday December 15, 2012 at Old Calvary Pentecostal cemetery AKA The Old Molino cemetery in Molino Florida.. Just off Hwy 182 or Molino Rd. at Veazey lane... Time: 2:00 pm.
http://www.trahanfamilyfuneralhome.com/
Ok. For people that are interested. Bill Vann is My Dad.  We know right now will be buried Saturday Dec.15 2012. We had a little setback yesterday, The Covenant Hospice sent his body to the wrong Funeral home. Yea, go figure... He had made all his own arrangements and paid in advance so, it would be easy. NOT!!! Had to chase down his body. But Trahan funeral home in Pensacola is handling everything. If you want to send flowers then send them there. They will deliver them to the graveside memorial.. That is all He wanted to make it easy on everyone.Only cost an extra $700.00 to get the wrong people to release body back to Trahan. But if you had rather make a donation to Covenant Hospice Please feel free to do so...He will be buried at the Old Calvary Pentecostal cemetery in Molino Florida. Also known as the Old Molino Cemetery... Will post any changes as I am aware.For driving directions contact me. Thank You for all the warm wishes and prayers at this trying time. JOHN.

My Barbers at John's II in Pace 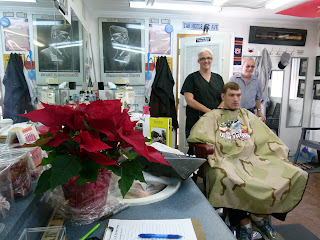 I dropped off a poinsietta and a used copy of my book to "D" at Johns II where I get my hair cut in Pace.  The shop is pretty close the JUNCTION of County Road 197 so I thought her military customers might enjoy skimming the book as they wait for cuts.  "D" is retired Navy. Her husband is too and helps run NJROTC at an Escambia County School. Ken Misenheimer has just entered the door at the front. He cuts my hair too and is good friends with Tom Carter and Neal Enfinger. 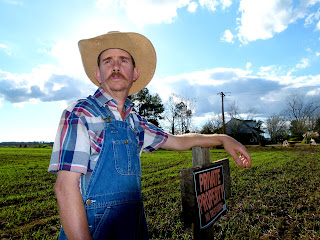 Doug the farmer in Chumuckla is hoping to keep white trash drunks off his folk's property as the Rednecks hold their parade. He put up some PRIVATE PROPERTY signs today and will press charges on anyone who trespasses.  His dad chased down a drunk who was spinning around in the rye field behind - destroying the crop last year.  This year Willard (Dad)  is in nursing care with a stroke, and Doug's mom is house-bound (doing better). Doug is disabled himself - so he put up the signs today. Doug says the parade is supposed to help the community people ... HA ! It probably does but at a price. And for all the veggies and help Willard and Doug give away to help less fortunate in the community from their own garden --- they will of course see nothing from the wonderful charity of the "Redneck Event". Not that they would be looking for help -- but it is just an observation from a disconnected party. ( Well sort of disconnected -- Doug and Willard always have okra, tomatoes, collards - you name it for ME when I drop by - and I DID give Doug some banana pudding from Salter's Market (Pam makes it ) a few days ago).

Overflow Parking for the Redneck Parade

Click this link to get a parking map for the parade.  the two page description has a map and some discussion about Chumuckla.  You can print it out and take it with you. 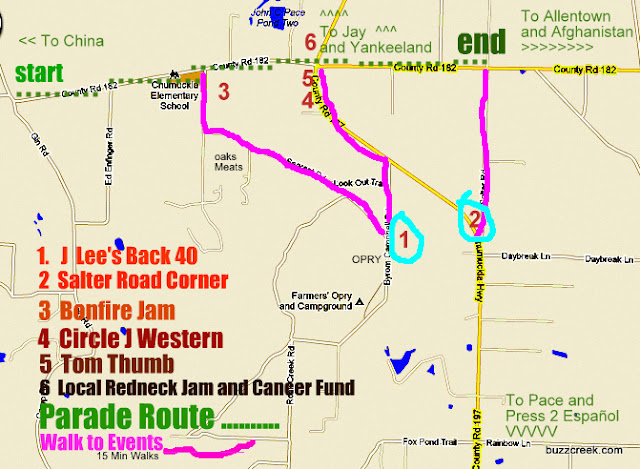 Ronald L. Mack, Sr. January 31, 1938- November 28, 2012 Ronald L. Mack, Sr., 74, of Milton, passed away on November 28, 2012. Ronald was born in Pensacola, but had lived in Milton since 1995. He was preceded in death by his wife, Betty Mack; father, Roy Mack; mother, Inez Warren; brothers, Jimmy, James, and Eddie; and sisters, Arsival, Vera, and Louis. He is survived by his sons, Edward Mack, Willie Mack (Susan), Ronald Mack, Jr. (Sandra), Henry Mack (Sheila), and Daniel Mack; brothers, Nathaniel Mack (Joann), David Mack, Robert Warren, and Roylene Harrelson; 13 grandchildren; 14 great-grandchildren; and a host of nieces, nephews, and extended family. A funeral service will be held on Saturday, December 1, 2012 at 10:45 a.m. at Trahan Family Funeral Home. The family will receive friends from 9:45-10:45 a.m. at the funeral home. Burial will be held in Ardfield Cemetery in Chumuckla. Trahan Family Funeral Home is in charge of arrangements. Express your condolences in our guestbook at pnj.com/obits . Published in Pensacola News Journal on November 30, 2012
Posted by Doug at 12/02/2012 No comments: