Margaret Laurine Parks
MARGARET LAURINE PARKS1927 - 2008
Margaret Laurine Parks, age 80, passed away peacefully Tuesday morning, January 29, 2008 at the home of her brother Bobby. Born in Allentown, FL, Laurine lived in several different places as a Military wife and had resided in Chumuckla, FL. since 1972. She was a member of Chumuckla United Methodist Church and especially enjoyed the Wednesday Morning Prayer Group and Ladies Retreats. Laurine was preceded in death by her husband of 54 years, Albert; her parents T. L. and Naomi Lee; and her sisters Theo and Dorothy. Laurine and Albert loved children, especially their nieces and nephews, although they never had children of their own. They always had treats for the children who visited in their home. Left behind to cherish her memory are her sisters, Barbara (Millard) Holley, and Louise (Ben) Ballard; and her brothers, Dozier Lee, Bobby (Donna) Lee, James (Hazel) Lee, Donald Lee, and Bill Lee. Funeral services will be 11:00 a.m. Friday, February 1, 2008 in the Lewis Funeral Home, Milton Chapel with the Rev. Clive Knights officiating. Burial will follow in Calvary Church Cemetery, with LEWIS FUNERAL HOME directing. The family will receive friends from 10 a.m. until time of services.Asked to serve as pallbearers are Matt Crews, John Johnson, Brooks Hiers, Jack Caraway, Jerry Kilpatrick, and Rufus Ard. Honorary pallbearers are Charles Gilbert, Willard Davis, Ben Hudson, Morris Ward, Lamar Ward, Copeland Griswold, Lavern Howell, Charles Lambeth, T. J. O'Kelley, Billy Smith and Alvin Enfinger.The family would like to thank Covenant Hospice (Milton Branch) for the wonderful way they cared for Laurine and her family. The last weeks were much easier because of their expert care and kindness. In lieu of flowers, the family asked that donations in Laurine's memory, be made to Chumuckla United Methodist Church or Covenant Hospice (Milton Branch), 5907 Berryhill Road, Milton, Florida 32570.
Posted by Doug at 1/31/2008 No comments:

He was a member of Margaret Street Church of Christ, in Milton, where he served as a deacon, and later an elder, for over 24 years. We are grateful he was given an opportunity to serve God for so many years. John loved his Heavenly Father and we are grateful for the life, death and resurrection of Jesus Christ through Whom is his hope for eternal life.

He was preceded in death by his parents; two sisters, Delia (Radford) Locklin, and Faye (J.D.) Cooley; and two brothers, James and Oma.

After graduating from David Lipscomb College in Nashville, TN he served four years in the Air Force; most of that time he was stationed in England. John and Roberta Bell were married March 12, 1955. After receiving his discharge from the Air Force, he returned to Nashville, where he received his Masters Degree from George Peabody College. His first job with Santa Rosa County School Board was as a teacher and coach at Allentown High School in 1956-1957. Later he served as teacher/principal at Harold School and then as principal of Chumuckla High School from 1959 to 1968. He was Director of Vocational/ Adult Education until his retirement in 1989.

Funeral services for Mr. Temple will be 2:00PM, Tuesday, January 15, 2008 at the Margaret Street Church of Christ Building with Minister Preston Silcox officiating.

LEWIS FUNERAL HOME is in charge of arrangements.

Visitation will be from 6 to 8 p.m. at the Margaret Street Church of Christ Building in Milton.

Memorial contributions may be made in Mr. Temple's memory to the Margaret Street Church of Christ Missions Ministry.

Fresh off his first tournament win of 2008, Fisher Bodenstein made a tough choice for a 14-year-old who loves sports.He quit.After recording back-to-back 78s at The Moors Golf and Lodging in Milton to win the Hurricane Junior Golf Tour's Panhandle Junior Classic 12- to 15-year-old division, he decided enough was enough. Bodenstein has played golf since he was 6 and baseball and basketball for just about as long. He's pretty good, too — just decent if you ask him. But in order to be really good, he quit basketball and baseball and has set his sights on golf."I won and that gave me some confidence," he said. "I won and it wasn't the best I could do."Bodenstein carded an 8 on No. 9 and finished with back-to-back double bogeys, three putts on both of them.The stumble — win or no win — was enough to make up his mind. Goodbye hoops and cleats, more time with a driver and putter.Why focus so much at such a young age?"He wants to be Panther number four to come out of Milton High," said Cal Bodenstein, Fisher's father, referring to local golf pros Boo Weekley, Bubba Watson and Heath Slocum — all Milton graduates.
He's on his way.As a freshman he played in the No. 2 spot for most of Milton's matches last season and made the regional tournament as one of three low medalists in the district tournament.It doesn't hurt that he's getting a little help from someone who knows what he's talking about.Bodenstein is coached by Jack Slocum, Heath's father.With help like that and the ability to see your dream and go after it, Bodenstein will be a fixture on the course for years to come.
Pensacola News Journal January 11, 2008
Posted by Cynthia at 1/11/2008 No comments:

Heaven welcomed home former long time Milton resident James V. Rosser. Coach Rosser entered the presence of his Lord and Savior Jesus Christ on Monday, December 31st when he passed away at Emmanuel Care Center in Kennewick, Washington. Coach Rosser loved his wife dearly and blessed his sons and grandchildren by showing them that truth and character are when your word and your deed become one. One of Coach Rosser's former students and basketball players said it best. "As a coach he taught us basketball fundamentals as well as fundamentals of life such as work ethic, perseverance, sacrifice, and teamwork. He did not look for stars but for players willing to give 100%."He was born October 11, 1921 in Quality, Kentucky to the late James E. and Ora Harper Rosser. He graduated from Lewisburg High School in 1940 and enrolled in Western Kentucky University in Bowling Green where he played basketball under legendary Coach E.A. Diddle, one of the first proponents of the fast break style. In June of 1942 after the onset of WW II, Mr. Rosser enlisted and served in the 8th Air Force with the 305th bomber group stationed in Chelveston, England. As one of ten crew members on a B17 Flying Fortress he manned the radio, was a waist gunner, and was among the first to be trained in the use of radar later becoming a radar instructor. In 1945 Mr. Rosser returned to Western Kentucky and received a B.S. in Physical Education in 1947. He later received a Masters degree from George Peabody College of Vanderbilt University.Coach Rosser's first coaching job was at Sopchoppy High School near Tallahassee, Florida. It was there he met his wife, Bennie Maude Kennedy, a fellow teacher and they were married on November 28, 1947. He next coached at Chumuckla High School in Santa Rosa County, Florida and then in 1954 he moved to Milton, Florida to become the basketball coach at Milton High School. During his years as basketball coach he won numerous championships and was named Northwest Florida Conference Basketball Coach of the Year four times. His teams went to the State Tournament four years in a row and he received an award for 400 wins in his 18 year coaching history. But he always saw himself as a teacher first and coach second. He taught biology among other subjects and also served as Athletic Director and Assistant Principal before retiring on December 20, 1986 after 32 years of service at Milton High School. Coach Rosser was a faithful member of First Baptist Church in Milton where he taught Sunday School. Coach Rosser is survived by his son and daughter-in-law, Rick and Ellen Rosser of Kennewick, Washington; son and daughter-in-law, Greg and Carolyn Rosser of Peachtree City, Georgia; six grandchildren, Storm (James) Hughes of North Bonneville, Washington, Katherine (Chad) Pettijohn of Pasco, Washington, Jo Beth and Seth Rosser of Kennewick, Washington, Jamie (Scott) Laslo of Birmingham, Alabama and Virginia Rosser of Peachtree City, Georgia; five great grandsons, Caleb and Micah Hughes of North Bonneville, Washington and Bryant, Samuel and Ian Pettijohn of Pasco, Washington; and sister Fanny Washer of Nashville, Tennessee. He was preceded in death by his wife, Bennie.A memorial service will be held for Coach Rosser 10:00 a.m. Saturday, January 5th at LEWIS FUNERAL HOME in Milton. A graveside service will follow at Banks Cemetery in Banks, Alabama. The Family requests that memorials be made to Pearl Ministries Inc. a non-profit ministry founded by Coach Rosser's granddaughter Jamie Laslo which aids orphans in Uganda, Africa. Tax deductible gifts can be sent to Pearl Ministries Inc., 100 Woodsdale Drive, Peachtree City, Georgia 30269.
Published in the Pensacola News Journal on 1/4/2008.
Posted by Cynthia at 1/04/2008 No comments: 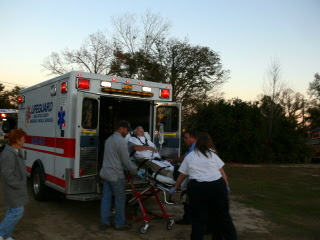 It was a hospital trip to Sacred Heart for Plug when he had heart attack symptoms on Jan 2 - that cold day he was having tarps put over his satsumas. A little nitroglyclerin and a 911 call and there were EMT's all over the place. Great response. Looks like some open heart hospital time to unclog and Plug will be back selling trees. See more at Chumuckla.com. More pictures too.
Posted by BUZZ CREEK at 1/03/2008 1 comment: