Jackie Duncan Salter Obituary
Date of Birth:
Tuesday, January 2nd, 1951
Date of Death:
Thursday, October 8th, 2015
Funeral Home:
Lewis Funeral Home
www.lewisfuneralhomes.net
6405 Highway 90 West
Milton, Florida, UNITED STATES
32570
Obituary:
Jackie was born January 2, 1951, in Century, Florida, to the late John "JD" and Ruth Wynell Hayes Salter.
He played basketball in school and graduated from Chumuckla High School in 1969. He graduated from Jeff Davis Community College in 1971 with an AA degree. He began working for the Florida Department of Transportation in 1972, and retired in 2005 after 33 years of service. Jackie and his family are devoted Auburn Tiger fans. He loved to fish and hunt with his children and brothers. Jackie enjoyed raising cows, hogs, and working on the family farm. Jackie was a loving and caring provider for his wife and children. His daughter and his grandchildren were his heart.
Jackie is preceded in death by his parents; two brothers, Martin Salter and Dan Salter; sister-in-law, Martha Salter; and a son-in-law, Terry "TJ" Gore Jr.
Jackie is survived by his loving and devoted wife , Mary Jane Salter; two children, Tabatha Salter Gore and Wesley Salter; daughter-in-law, Carlyn Salter and ex-son-in-law, Darin Dawson; all of Chumuckla. He is also survived by his grandchildren, Jacklyn, Weston, and Brooklyn Salter, of Jay; and Brianna Stewart of Milton; his "claimed grandchildren," Alexis Adrienne, Arielle (Patrick) Patterson of Milton, and Ethan Harris and Kennedy Salter of Jay; niece, Angie (Mike) Pennell; two nephews, Jerod Salter and Joel (Stephanie) Salter; aunts, Grace (Charles) Carnley of Jay, Ollie Joe (Charles) Williams of Georgianna, Alabama, and Betty McMillan of Pace; a special cousin, Gail (Bill) Allred; and an extended list of family members.
Visitation for family and friends will be held from 6:00 p.m. - 8:00 p.m., Friday, October 16, 2015, at Lewis Funeral Home, Milton.
Funeral Services will be held at 2:00 p.m., Saturday, October 17, 2015, at Lewis Funeral Home, Milton Chapel, with Bro. Larry Pearson, Bobby Carnley, and Mark Stuart officiating. Lewis Funeral Home, Milton, has been entrusted with arrangements.
The Salter family expresses sincere thanks and gratitude to the nurses at Jay Hospital, Sacred Heart Hospital, Baptist Hospital and West Florida Hospital; Dr. C. David Smith and staff, Dr. Ronnie Wyl

Tom Reynolds of the Chumuckla community died Friday afternoon October 9, 2015 after a lengthy battle with cancer. Tom was born in Samson, Alabama. He moved to the Chumuckla community in 1956. Tom proudly served his country with the Air Force during the Vietnam war. Following his time in service, he lived in Colorado Springs and then returned to his beloved Chumuckla community where he worked off-shore before becoming an over-the-road truck driver. He also became the biggest fan of the sports programs in the area. He was proceeded in death by his father, Louie Reynolds. He is survived by his wife of 46 years, Jeanette Reynolds and his mother, Loveda Reynolds. Tom leaves behind 2 sons Jim Reynolds, Brian Reynolds (Michelle); 1 step-son Scott Holmes (Molly); and 7 grand-children Danielle, Lindsay,Timothy, Paul, Hannah, Alex and Brendan. Visitation for family and friends will be held at 10:00 am on Tuesday, Oct 13, 2015 at Chumuckla Community Church with a Celebration Service following at 11:00 am. “I pledge allegiance to the flag of the United States of America, and to the Republic for which it stands, one Nation UNDER GOD, indivisible, with liberty and justice for all” 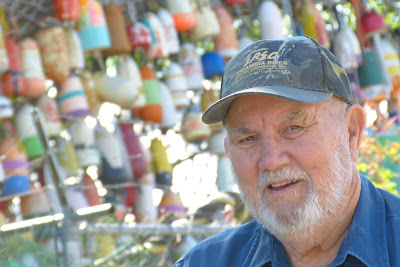 The industrial intensity of harvest season is always something to marvel at if you are a part of the process or just an observer.

Your Peanut at Work

Tiger Godwin explains the peanut harvest to Chumuckla.com.  Peanut and Cotton crops are ready by October and November depending on the planting dates and time to maturity for a given variety.