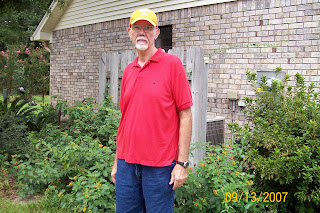 From: Curtis Cook Thanks!!!
What can I say? I am surprised and even joyed in receiving the M&M's and now the card. Yes it was good to see most everyone at the reunion. The white hair is almost gone and being replace with the skin, I expect what is left will fall out in the next couple of weeks. But, it is OK. It could come back Black or as mother said when I was born it was Blonde and curly. It does not matter at this point, what matters is the Doctor told me monday that I am responding to the treatment and I have finished my second treatment and my next one will be Oct. 8th. I am doing great and you don't know how bad you felt until you feel good.Curtis ... Reply -- This is good news! Give it the FULL COURT PRESS.. whatever that is..I have no clue.. I was just the photographer...HA!! .. Vic

OSWAL E. "RED" MCBRIDE1921 - 2007
Oswal E. "Red" McBride went Home to be with his Lord on Wednesday, August 29, 2007.Red was born on November 22, 1921, to Thomas and Bama McBride. He graduated from Chumuckla High School and was a member of the State basketball championship team from Chumuckla High School in 1941.He was a veteran of the U.S. Army and served in World War II with the 95th Signal Company. He retired in 1978 from the Naval Air Rework Facility in Pensacola, Florida.During his retired years, he and his wife enjoyed traveling and camping in their Winnebago, fishing, and attending all the activities of their four grandchildren who they loved dearly.He was preceded in death by his parents; five brothers and six sisters.Red is survived by his loving wife of 64 years, Faustine; a son and his wife, Ed and Rebecca McBride; a daughter and her husband, Barbara and Dane Allen, four grandchildren, Jeff Allen, Staci (Keith) Yates, Randy McBride and Amy (Darren) Robinson; four great-grandchildren , Kinsey Hassell, Bryce Yates, Jake McBride and Haley Robinson.Visitation will be Sunday, September 2, 2007 at 1:00 p.m., followed by the Funeral Service at 2:30 p.m. at Olive Baptist Church with Dr. Ted Traylor and the Reverend Eugene Steele officiating.He will be laid to rest at Barrancas National Cemetery on Tuesday, September 4, 2007.Memorials may be made to Olive Baptist Church or Covenant Hospice.FAITH CHAPEL FUNERAL HOME, 100 Beverly Parkway, is in charge of arrangements.
Published in the Pensacola News Journal on 9/1/2007.
Posted by Cynthia at 9/01/2007 No comments:

Lewis, Anita Cathryn “Cathy” A memorial service for Anita Cathryn “Cathy” Lewis, 67, of Newark, Ohio, formerly of Pace, will be held at 10 a.m. on Saturday, September 1, 2007 at Lewis Funeral Home in Milton. Mrs. Lewis died August 6, 2007, at Riverside Methodist Hospital in Columbus, Ohio. She was born July 7, 1940, in Milton, Florida, to the late Aubrey and Vera (Enfinger) McBride. Mrs. Lewis graduated from Chumuckla High School in 1959. She retired from the Licking County Auditors Office after 35 years of service. She was a member of the Newark-Granville Altrusa Club. She is survived by a son–Ernest Eric (Lisa Marie) Lewis of Maiden, N.C.; a granddaughter–Laci Rene Lewis; a brother–Tommy McBride of Pace; and two sisters–Martha Reed and Pat Noles, both of Milton. In addition to her parents, she was preceded in death by her husband– Luther Clinton Lewis, and a sister–Linda Tisdale. Family and friends may call from 10 a.m. to 11 a.m., with services beginning at 11 a.m. at Lewis Funeral Home Chapel. Burial will be at Serenity Gardens in Milton.
Doug Davis
Posted by Cynthia at 9/01/2007 No comments: