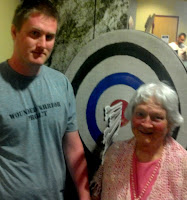 March 20, 1923 - July 27, 2012.   Myrtle Gertrude Carswell Campbell, 89, born in Noma, Florida , a life resident of Santa Rosa County  and widow of J. Lee Campbell. Myrtle was the loving mother of Jim and Vic Campbell and Wanda Campbell Roberts.  She found much joy as mother, grandmother and great-grandmother.

Myrtle was born to Navy Victoria and John Robert Carswell as the 9th of 10 children who are all deceased except one, Amie Carswell Howell Hendrix who resides in Jacksonville. Her siblings were, Malgram, Manual, Cecil, Vera, Onie B., E.W., Amie, Bobby, and R.V.  She was a 1941 graduate of Allentown, High School and married J. Lee Campbell in 1944.

She loved children’s ministry and served our Lord in many area churches. Her most loved service was through the Child Evangelism Fellowship.

Funeral Service will be 2 PM, Sunday, July 29 , 2012 at Lewis Funeral Home, Pace Chapel with Chaplain David Gibson officiating and Dr. Michael D. Wiggins officiating. Visitation will be from 1PM until time of service. Burial will follow with a graveside service at Elizabeth Chapel  Cemetery. Pallbearers will be Myrtle’s grandsons.

Trevor James Thomas, 21, of Jay, FL passed away Tuesday, July 3, 2012 on Chumuckla Highway in a tragic car accident on his way to work. He was born at Sacred Heart Hospital in Pensacola, FL on November 28, 1990 on his Grandmother Judy Ballard’s birthday. Trevor was preceded in death by his grandparents, Rex Thomas and Judy Ballard, his cousin Eric Thomas and uncle, Mike McLean. He is survived by his fiancé Leanne Hughes, parents, Dale and Pam Thomas, siblings Whitney Thomas-Singleton (Brian) & Marshal Thomas, nieces, Kali Vernon and Chloe Singleton, grandparents, Ann Thomas (Roy Dickey), Carlton McLean and Silas Ballard and future in-laws Kimberly Brooks, Brittany Brooks , Sarah Brooks and James Hughes. Trevor was a 2009 honors graduate of Jay High School. Heplayed trombone from 6th to 12th grade in the JHS Band, and was Band President his Senior year. While in band, Trevor met his best friend and love of his life, Leanne Hughes. He proposed to Leanne on December 10, 2011 on Pensacola Beach. They’ve been happily together for seven years. He was a student at the University of West Florida majoring in Chemistry and also working at the woodbine McDonalds. Trevor was such a special person. He was very intelligent, incredibly loving, and extremely happy. He always had a bright smile on his beautiful face that touched everyone’s heart that knew him. He loved music, was constantly singing and had an amazing voice. He spent the majority of his time with his family and friends whom he loved dearly. Trevor’s hobbies included, gaming on the Xbox 360, reading, basketball, football, fantasy football, playing magic cards, and playing with his and Leanne’s dog, Tater. Trevor had a soft spot in his heart for people in need. He was a very giving person and would help people any way he could. Trevor will be deeply missed and loved by all those who treasured him. A visitation will be held at Jay Funeral Home from 6-9 P.M. on Saturday, July 7, 2012. Funeral services will be held on Sunday, July 8, 2012 at True Worship Assembly at 3:00 P.M. with Rev. Johnny Johnson officiating services. Burial will follow at Pineview United Methodist Church. Pallbearers will be Willis Cannon, Derek Diamond, Zach Dykes, Zachary Godwin, Robbie Rawls, and Jake Sasser. Jay Funeral Home is in charge of arrangements.
Posted by BUZZ CREEK at 7/11/2012 1 comment: