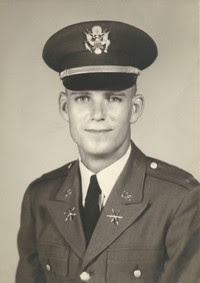 MAJ (Retired) James Enfinger, Sr. Hephzibah, GA – Major (Retired) James “Jimmie” Elbert Enfinger, Sr., 73, left from University Heart and Vascular Institute for his heavenly job to work for his Lord on Sunday, May 26, 2013. Funeral services with full military honors will be held at 11:00AM Friday, May 31, 2013 at the Bath Presbyterian Church with Pastor Dick Geishman officiating. Interment will follow in the church cemetery. Jimmie was one of 14 born to the late Hazel and Francis Enfinger. Being part of a large family, he learned at a young age the value of hard work. In 1958, he joined the US Army where he rapidly gained promotions, then applied and graduated from Officers Candidate School. He served in the Vietnam War, received various awards for duty and bravery, and retired with over 20 yrs of service as a Major at Fort Gordon. Upon retiring from the Army, he began a very successful business-American Custom Fence Company. Through his honesty and hard work, his company gained the respect of not only his customers, but his competitors as well. When not working, he enjoyed time fishing with his “Briar Creek Buddies” or visiting with his dear friend, Marian. Whether they were at the “cabin” cooking, reading books, or on the road visiting state parks, this was a time he looked forward to and very much enjoyed. Jimmie dearly loved his children and grandchildren who gave him much joy. He will be greatly missed by all who knew him. He was also preceded in death by nine siblings, Lillian Lottie Heath, Allen Vernon Enfinger, Dorothy Barbara Donnelly, Vera Mae McBride, Althea Blum, Frances Jeanette Raybon, Howard Enfinger, Edwina Mock and Norma Jean Sumlin. Those left to mourn Jimmie include his three children, Lori Williams (Michael), Jamie Enfinger (Josie) and Jennifer Enfinger; five grandchildren, Maggie DeLoach (Joseph), Jessica Enfinger, Abby Williams, Chloe Ryle and Matthew Enfinger; the mother of his children, Bobbie Byrd; friend and companion, Marian Hearn; four siblings, Miriam Davis, Frank Enfinger, Wilton Enfinger and Gwen Riddles; numerous nieces, nephews and friends. If so desired, memorial contributions may be made to Augusta Warrior Project, 4115 Columbia Rd, Ste 5-333, Martinez GA 30907. The family will receive friends at James Funeral Home from 6:00-8:00PM Thursday, May 30, 2013. The family offers a special thanks to the doctors and nurses at the University Heart and Vascular Institute. ******************************** The Fisherman's Prayer God grant that I may live to fish for another shining day, But when my final cast is made I than most humbly pray, When nestled in you land net as I lay peacefully asleep, You'll smile at me and judge that I am good enough to keep.
Posted by Doug at 5/29/2013 No comments:


Rev. Tom Sharron has a very heartfelt and humble way of presenting a message. The Church is Chumuckla Community Church and it is located at Elizabeth Chapel in Chumuckla.
Posted by BUZZ CREEK at 5/25/2013 No comments:

Salter's Farm Market
Tell the folks about it !

Geraldine Livingston 1933-2013 Geraldine Livingston, age 79, of Chumuckla, FL, passed away Tuesday, May 21, 2013. She was born June 9, 1933 in Chumuckla, FL, to the late Sam Ard and Edna Nettles Ard. Mrs. Livingston enjoyed fishing and socializing with her friends. She was always on the go visiting others and very full of life. She was a caregiver to many of her friends. Survivors include her son, Wilburn (Audrey) Caraway of Richmond Hill, GA; a sister, Betty Lou (W.L.) Simmons of Jay, FL; two grandchildren, Steven (Charlene) Caraway of Jay, FL and Cassie (Billy) Wickline of Poquoson, VA; and four great grandchildren, Kayne & Kolton Caraway, Cody Beech and Zachary Wickline; and numerous nieces and nephews. Funeral services will be Friday, May 24, 2013 at 11 AM at New Hope Assembly of God. Interment will follow at Elizabeth Chapel Cemetery. The family will receive friends at the funeral home Thursday, May 23, 2013 from 6 until 8 PM. National Cremation & Burial Society of Milton has been entrusted with the arrangements. Express your condolences in our guestbook at pnj.com/obits
Posted by Doug at 5/23/2013 No comments: 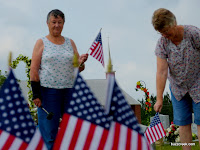 Volunteers from the Chumuckla community gathered over the weekend to place American Flags by the graves of veterans at Elizabeth Chapel Cemetery.

She was born December 12, 1922 in Panama City, FL to James Dennis and Lottie Turner. She will be lovingly remembered as a pastor’s wife, supporting her husband’s ministry for many years. 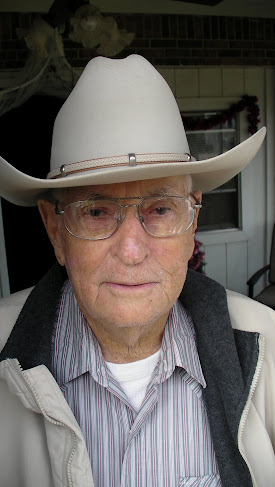 Wheeler Cook, of Chumuckla, FL, passed away on May 15, 2013 at the age of 93. Wheeler was born on February 18, 1920 to Louis and Mattie Sewell Cook. Mr. Cook retired from the State of Florida Department of Transportation after 31 plus years. Wheeler was preceded in death by his parents; 4 brothers, Sam, Phillip, Wesley, John A.; and one sister, Mary Elliot.Wheeler is survived by his wife of 54 years, Audrey Freeman Cook; his son, Joe (Denise) Cook; 6 daughters, Earleen Henderson, Voncile (Joe) Crews, Jean (Kenny) Watson, Ann (Jim) Davis, Murl (Ross) Faircloth, Bonnie (Richard) Bailey; 15 grandchildren; 24 great-grandchildren; and 3 great-great-grandchildren.Services will be held on Sunday May 19, 2013 at Chumuckla Community Church (formerly Elizabeth Chapel) in Chumuckla, FL. The family will receive visitors from 2:00-3:00 p.m. with funeral services starting at 3:00 p.m. Burial service will be immediately after the service at Elizabeth Chapel Cemetery.Trahan Family Funeral Home is in charge of arrangements.Pallbearers will be Jeff Boutwell, Mark Dooley, Mike Dooley, Joey Cook, Michael Bailey, and Andy Lee.Honorary Pallbearers will be Jordan Shell, Brandon Chambliss, Joseph Wheeler Cook, Bailey Calhoun, Kenzie Calhoun, and Aaron Bailey.In lieu of flowers the family requests for donations to be made to the National Breast CancerFoundation at nationalbreastcancer.org.Services will be conducted by Donnie Sowell and Charlie Elliot.Express your condolences in our guestbook at pnj.com/obits
Published in Pensacola News Journal on May 18, 2013
Posted by BUZZ CREEK at 5/18/2013 No comments:

Rachel Marlene Campbell, 70, of Panama City, Florida passed away peacefully on May 15, 2013 at her home. She was born March 9, 1943 in Pensacola, Florida to the late Fred and Leola Bodie Campbell. As a high school graduate, she moved to Lakeland, Florida to attend Southeastern Bible College. She began her career as a school teacher in Okeechobee, FL. After 38 years of teaching, she retired in 2003 while living in Panama City.She is preceded in death by her parents and siblings, Louise McHenry, Howard Campbell, Doris Jackson, Melba Tanton, Fredda Hutchison, Rufus Campbell and Willard Campbell. She is survived by her children of her heart Melissa Mitchell-Murphy of Okeechobee, FL and Susan G. Albritton of Nahunta, GA; brothers, Curtis (Suzanne) Campbell of Debary, FL and Wendell Campbell of Blakely, GA along with many nieces, nephews and her faithful and devoted four-legged babies, Lil' Bit and Angel. She was lovingly cared for by her nieces, Sonja Mannion, Connie Branch, Cathy Peel and Sherri Paul, as well as her dear friend, Marcy Warrell.Rachel had many special interests such as teaching, genealogy, photography, wood working and antiques. After years of research, in 1983, she published her book entitled Campbell and McCall Family History. (This book is a definitive resource for many families in Chumuckla)A graveside service will be held on Friday, May 17, 2013 at 11:00 AM CST at Elizabeth Chapel in Chumuckla, FL. In lieu of flowers, please make contributions to St. Jude or to the HOPE program at Northridge Church in Pensacola, FL in memory of Rachel.Those wishing to extend a word of condolence may do so at www.heritagefhllc.com.Express your condolences in our guestbook at pnj.com/obits
Notice from Pensacola News Journal
Posted by BUZZ CREEK at 5/18/2013 No comments: