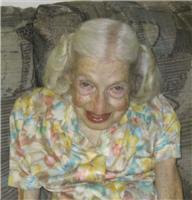 Shirley Allen McDaniel, 83, of Milton, died January 1, 2015. Mrs. McDaniel was born in Jacksonville, Florida, to Ray Franklin Allen, Sr, and Madeline Michette Allen. Shirley and her husband, the late J. V. McDaniel, moved around for a number of years, then returned to Santa Rosa County and their families in 1987.Shirley's great-grandfather was Jesse Carter Allen, one of the early settlers of Santa Rosa County and the territory's first sheriff. She was preceded in death by her parents, her husband, her two sisters, Madeline and Laurel, and her two brothers, Ray, Jr and Alex. She taught school for a number of years and was a long-time member of the Presbyterian Church. She is survived by a number of nieces and nephews; and her very special friend and caregiver, Tina Beedle.Funeral Services will be held at 12 noon, Monday, January 5, 2015, at Lewis Funeral Home, Milton Chapel. Visitation will be held from 11:00 a.m. - 12:00 p.m., prior to the service. Interment will be private.In lieu of flowers, the family appreciates memorial gifts given to the Westminster Presbyterian Church, Milton, or another charitable organization, of your choice, in her memory.