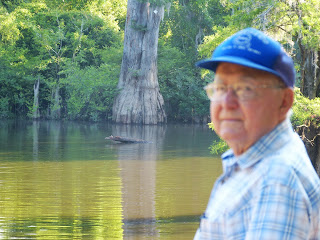 Alvin Henry Enfinger1925-2013On Monday, September 2, 2013, Alvin H. Enfinger, peacefully made his transition to Heaven surrounded by his beloved family.
(Alvin and Williams Lake Run - Photos)
Mr. Enfinger was born September 27, 1925. He was raised and worked on his family's Depression era farm in Chumuckla, Florida. In January, 1944, he volunteered and served in the United States Navy during World War II. He was discharged in May, 1946. He married his childhood sweetheart, Doris Gillman on August 5, 1946. He attended Auburn University from 1948 to 1951, graduating as a Phi Kappa Phi Pharmacy Honor Society Member. He began practicing pharmacy in 1951. In 1954 he founded A & E Pharmacy, at one time, the largest in Pensacola. A & E Pharmacy is the areas oldest continuously family owned and operated pharmacy. In 1970, he became a successful breeder of Red Angus Cattle, earning national and international recognition. He was a Past President of The Southeastern Red Angus Association. For many years, Mr. Enfinger worked diligently to protect and preserve Coon Hill Cemetery. As president of Coon Hill Cemetery Trust, he actively raised funds, rebuilt and repaired the grounds, and educated the public about its history, which dates before the Civil War.Mr. Enfinger is preceded in death by his beloved wife of almost 35 years, Annie Doris Gillman Enfinger; his parents, Lewis Thompson Enfinger and Jessie Ora Steadham Enfinger; a grandson, Jeffrey Mark Burch; a brother, Adrian Enfinger; and a sister Ora Dean Enfinger Bailey.He is survived by his five children, Art Enfinger, Rhonda Enfinger, David (Mary) Enfinger, Beth (Wayne) Orr, and Jan (John) Herrera; eleven grandchildren, and eighteen great grandchildren.Funeral Services will be held at 10:30 am on Saturday, September 7, 2013, at the Pace First United Methodist Church with Rev. John Webb officiating. Burial will follow in the Elizabeth Chapel Community Cemetery with Lewis Funeral Home Pace Chapel directing.The family will receive friends from 6 to 8 pm on Friday, September 6, 2013 at the Lewis Funeral Home Pace Chapel. (A Family gathering is scheduled between 5 and 6pm).Express your condolences in our guestbook at pnj.com/obits

Published in Pensacola News Journal from September 5 to September 7, 2013
- See more at: http://www.legacy.com/obituaries/pensacolanewsjournal/obituary.aspx?n=alvin-enginger&pid=166782565&#fbLoggedOut
Posted by BUZZ CREEK at 9/02/2013