Another hot day in the river swamp. Too bad the gnats aren't as visible as they are in real life. Some of the flavor of the river is lost without the swatting and eye infections. Don't recognize the waterman, but he looks as if his fingers are on fire, and he is trying to blow it out. I'll ask around if anyone knows of a poor fellow with 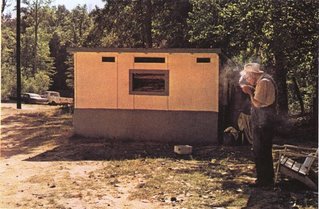 burned hands. That's sure to be the guy.

The other spring indicated on the map link on this website is Mystic Springs, about 1/4 mi. N. of Bogia and on the west side of the river. When the first crackers came to the 'Scamby River Basin' to claim their Spanish Land Grants (or as squatters), the Mystic Springs area was known as the "Hot Ponds". At one point near the turn of the century (that's the turn of the 19th C.), there was a hotel and an outpouring area where patrons (and locals) bathed in the pool of tepid water.

My Grand Mother told me that water was a warm 84-86 degrees degrees before the quake (see below) and 74-75 aferward.

One of those frequent, and barely noticeable, shifts in the earth's crust that we experience on a semi-regular basis here, closed the source some in the mid 1950's, and the water began to surface in a colder state. Those living nearby told me only yesterday, that the temperature has begun to rise again in the pond itself, indicating that we could have a hot pond returning. Most folks now think this pond is simply another dead lake on the river, or a disappearing slough, but once it had been of great value.

There even was a special Spanish Land Grant for the 'Ponds' alone, dating from the 1700's.
After opening in early 1900, the 'Hotel Mystic Springs' closed in the mid 1920's. Thereafter an enterprising fellow rented and opened the first floor of the old hotel for Friday and Saturday night dances. This lasted for 6-8 years, but it eventually closed down, too. Prohibition was over (actually, prohibition never really affected us here. The "home fires" burned right on), the Depression was on, and the sawmills were starting to move to new timber.

There was little money for the dancing and fun of the roaring 20's. Jobs and food were hard to get here, even prior to the stock market crash.

The locals  to use the "cement pond" catch basin as a swimming hole until the W.W. II years. Mama drowned in that pool, in '27 or '28. She revived, thankfully, and went on to a life devoid of trips to the swimming hole, beach, or swimming pools. Years later, in the midst of the time in life when I knew more than my parents did, I sometimes wondered if that drowning had anything to do with Mama's obvious deficiencies. (I never had the nerve to even MENTALLY question why Dad was "slow").

Several years passed, I was a good deal older.  I was once again walking, and talking with them, and I noticed both had suddenly become more intelligent, and very wise. Obviously it was a "Miracle Recovery". What a relief it was to know I came from such resilient blood..

I have a picture of the Hotel in Chumuckla Springs. Have you seen it? If not, I will share it with you. Thanks for all you have shared with me and everyone else.
'till next time, Cary

Im from Pensacola but have never heard of these springs. I was wondering if you could tell me where they might be or how to get there. Also where was the Hotel Mystic Springs located.

Any help would be appreciated.

I'll have to add some map links and not to this. Google mystic springs campground. Chumuckla Springs. Both perhaps 15 miles south of the Alabama border and on opposite sides of Escambia River. They are not huge springs like some are farther East in Fl.