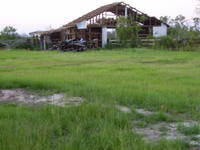 I am getting the barn near to completion. The tin is yet to go up but Scott has it ready - almost. I confirmed why education is not a good thing ... again. After stripping the roof with treated 2x4 lumber to accept the new tin, the tin people (South Alabama Metal Works) told me that the new treatment used on lumber (yellow wood - or ACX), because of the copper in it, will react with the tin and the zinc screws and destroy them. I was happy before acquiring this piece of education and would have gone home with my tin and screws and happily completed the job - ignorant of future damage. Ignorance is happiness. Education just makes you aware of more things to worry about. Well, we solved the problem of the treated wood by placing felt on top of it and by using stainless steel screws which are twice as hard to use because they are not 'self drilling'.
Peanut season is in full swing and I got some raw green peanuts to boil (Lowry Farms). I will bring some home. They guys at the Sparta Lake Mohawk barber shop are bemused by boiled peanuts. Cotton is said to be doing very well. The bolls are heavy. It will be late October before cotton harvest. Frank Lowry sold out his cotton equipment last year after Ivan and prior storms and bad years soured his appreciation for the crop. Of course this year, cotton prices are sky high and Frank is in peanuts - which - he tells me - are not grading out as well as hoped.
Weather has been very good these two weeks. low humidity. No rain. Perfect for peanut harvest. I have visited a lot of cousins when not working and taped some interesting conversations. I hope to put some up on my www.eggzono.tv stations when i get back. Will be back in office on Sept 19.
The people around here continue to pull a lot of resources together to send over to the Mississippi storm area and some to New Orleans. Nawlins and Miss Gulf Coast need heavy duty help. Most smaller church / service club groups go in for several days with relief help for the locals who are worn out from 24/7 stress and service to those in need. A lot of them see it as their duty and honor as a 'payback' for all the help that came this way after IVAN. Lots of 'refugees' are being settled into this area for temporary shelter/care/jobs and etc. I don't know who was upset being called a refugee and insisted on being called an evacuee ... but the correct word is refugee. You don't have to be from some poor African country to be a refugee. If you need refuge -- you are a refugee. They need all the help they can get. Well, at least people here understand. They are still recovering from IVAN and DENNIS, but whatever they can do for Katrina victims they are doing. Chumuckla's firehouse is to house a family with two sets of twins and were looking for a washer and dryer to donate. Aunt Mary (of Aunt Mary's Deli ... my cousin) told this to me. I am sure one will show up. I have to say, I had the best hamburger ever (or in a long time anyway) at Aunt Mary's Deli. 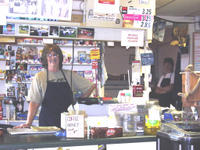 It is a picturesque place. You can eat your take out hamburger while looking at the latest damage reports on TV (from Katrina) while trucks full of debri from Dennis are rolling past on Chumuckla Highway and people with Ivan damage are buying some take out meals for barn repair workers.
Posted by BUZZ CREEK at 9/14/2005

Hey, Vic!
I'm so happy I finally remembered to look at this site and read all of your updates from the wonderful "state" of Chumuckla.net!
Thank you for the memory of the peanuts and cotton in full production. To see the cotton on the side of the road as you ride along is somethin' a yankee would nevah undahstand!
I know your "mamanem" are happy to have your sweet face and fine hep too!
I look forward to all of your writings, your pictures and your videos, cousin Vic! Keep 'em comin'!
Hugs!
Cousin M J :-)

I can’t relate to such misery
Not able to comprehend
To be so despondent and alone
Wondering how it will all end.
I can’t relate to all the water
That never leaves or recedes
To what floats or breeds in that water
Scares me badly I concede
I can’t relate to separation
From my family and my life
To stand for days in desperate wonder
The fear cutting like a knife
I can’t relate to abandonment
From the ones who said they cared
This is US not a foreign country
Who failed to be prepared?
I can’t relate to the long delays
So many lives are at stake
My TV fills my heart with sorrow
Hoping someone can relate.