C G "Chief" Lawler, age 88, passed away on September 23, 2008. He was born in Hodges, AL and has resided in Santa Rosa since 1957. He was a retired Navy Chief Petty Officer with over 21 years of service. He served in WWII in the Asiatic Pacific Campaign. He was awarded the Commendation Ribbon, Aircrew Insignia, Air Medal and the Distinguished Flying Cross. He also served during the Korean conflict. He also retired from the City of Milton.

Funeral services will be held at 2:00pm, Friday, September 26, 2008 at McLellan Church of Christ with full military honors. Visitation will be from 1:00pm to 2:00pm prior to service. Honorary pallbearers will be James Manning, Wayne Dennis, Phillip Cohron, Aubrey Courtney, Eddie Mixon, Roy Jones, Jr., Randy Bass, and Roger Hardy. Lewis Funeral Home, Milton Chapel in charge of arrangements. Friends may send condolences and share fond memories with the family at www.lewisfuneralhomes.net Published in the Pensacola News Journal on 9/25/2008 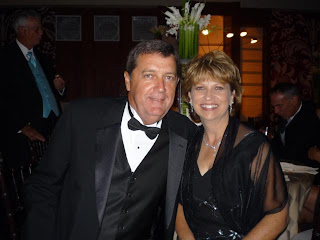 Patty Joyner Hawthorne and her husband Wayne. Their daughter Karen is married to Boo Weekly. (Cynthia)
Check us out! Here we are at the Ryder Cup Gala in Louisville, Ky last week! We had a GREAT time!!!!!! (Patty)

Email ThisBlogThis!Share to TwitterShare to FacebookShare to Pinterest
Labels: Obituaries

Cynthia had gall bladder surgery because she thought that was what was making her feel so sick and tired. Since then she had 3 spells. She will be feeling fine one minute and the next minute she will be sick to her stomach. High temperatures and blood work and CT scans led to a tumor (big as a softball) diagnosis. An operation is imminent. Likely a Monday surgery. Your prayers are requested and appreciated. The hospital for contact will be Sacred Heart.

In other developments: Diane Hatfield has completed chemo therapy and is at home. Tom Reynolds is undergoing stent surgery for his arteries this week. Curtis and Benny appear to be recovered from their bouts with cancer. Norman Walther is well from his heart surgery but his wife is in treatment for lung cancer and making progress. There are several more cancer cases in our Chumuckla family and they all are in our prayers.
Posted by BUZZ CREEK at 9/03/2008 1 comment:


June 10, I had gall bladder surgery because we thought that was what was making me feel so sick and tired. Since then I have had 3 spells. July 5, the end of July and August 17. I will be feeling fine one minute and the next minute I will be so sick to my stomach. Sometimes I can throw up but most of the time I don't I feel like I am going to have diarrhea but usually I am constipated. The first night I run almost 102 temp. The second night almost 101. The third night almost 100. My stomach is so sore afterwards for 3 or 4 days. I went to my primary doctor on Friday, August 22. He gave me antibiotics to take for 10 days. The next Wednesday night I was running 100.8. Last Tuesday I had blood work. Wednesday morning I had an ultrasound and the nurse called me and said I had a large mass. Thursday, I had a CT scan and more blood work. Today I had more blood work.

I got a call this morning to be at Dr. Stalnaker ASAP.
I am waiting for Dr. Stalnaker to call me and let me know when I will have the surgery. The tumor is probably a little bigger than a softball from the way he held his hands. He says it shows signs of being cancer so he wants a cancer doctor there when I have surgery. He is trying to get up with a cancer doctor, my heart doctor and GP before he gets back to me.
He will do a complete hysterectomy and lymph nodes. He told me it is possible that they might have to remove part of my colon and wear a bag for awhile. He is surprised that Dr. Tugwell didn't find it when he took out my gall bladder.
At least now I know why I am feeling so tired. I thought it was just taking care of my 3 kids (Jackson, Julia and Tommy).
Posted by BUZZ CREEK at 9/03/2008 No comments: