Funeral services for Mr. Sanders will be 10AM, Wednesday, September 27, 2006, at Hopewell Primitive Baptist Church with Rev. Bill Stewart and Rev. Greg Smith officiating. Burial will follow in Hopewell Primitive Baptist Cemetery with Lewis Funeral Home directing. Visitation will be 6 to 8PM, Tuesday, September 26, 2006 at Lewis Funeral Home in Milton. LEWIS FUNERAL HOME is in charge of arrangements.
Garia is the media specialist at S. S. Dixon Primary School.
Posted by BUZZ CREEK at 9/26/2006 No comments: Links to this post

Jay Native Back in Kuwait 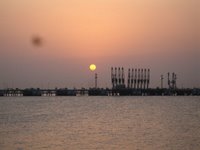 REPORT FROM MATT SETTLE (Navy) What can I say? This week has been an eye opener for all. We started the week with a Negligent Discharge. For everyone that not familiar with this term, a “ND” is a really serious offence. It is where a person fires a weapon that was not intended to fire. Luckily, the first one (yea there was more than one) was into a clearing barrel. The good thing is that the clearing barrel (a device that is intended to capture a rifle round fired into it a very close range) worked as advertised. The second “ND” was during training where a Petty Officer was showing someone how to clear an M-9, 9-mm pistol. When he pulled the slide back and released it, the weapon went off into a near by sand bag. Not sure how that happened, but it did. And the third (and hopefully final one) was with a crew serve weapon on one of the boats. A crew serve weapon is the Navy’s term for a machine gun. That round went off into the ocean. 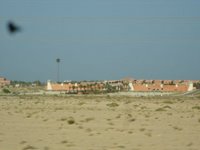 Well, why am I telling this story. I wanted to point out that no matter what you read or what people back home tell you, this is the real world. We are using real weapons, real bullets and real people. The situations every day that we experience are real. What we do every day has risks associated, risks that are minimized if people follow the correct procedures. It is only when people get sloppy and do not follow these procedures that the risks out weight the benefits. Everyone is OK and we will get over this very large hurdle. But we have along hill to climb to get over this one.

The weather is starting to get cooler. Now hold on to your chair, the high today was 104 degrees. Now that may not seem cool, but four weeks ago the high was 135 degrees. I hear that the temperatures in Kansas City are in the low 60’s at night. Well, that is a 30 degrees change for the highs in the summer. We have had a thirty degree change so far in our highs here in Kuwait. The humidity is in the teens so the heat is dry and the lows are in the high 70’s or low 80’s. Actually the mornings have been quite nice. My Kuwaiti crud has almost gone away. I had called it the Kuwaiti Crude in pervious e-mails but crude is what they send through the pipes in the picture below. The Kuwaiti crud is the cold everyone gets just for being here. Sorry for the black spot. My camera does not like the desert sand. L 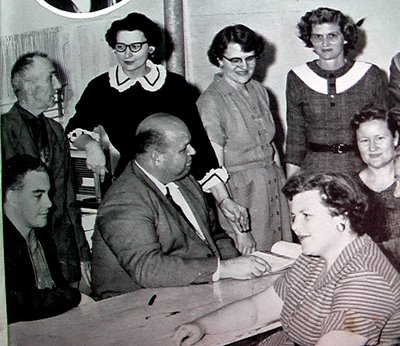 These are some Chumuckla Teachers in 1958. L-R ... McCory, Hornseby, Magee, Brown, Campbell, Stewart, Thompson, McCaskill. Melba McCaskill passed away recently. See the notice below. Margaret Campbell and Dovie Stewart are still in Chumuckla or Brownsdale.
Posted by BUZZ CREEK at 9/03/2006 No comments: Links to this post 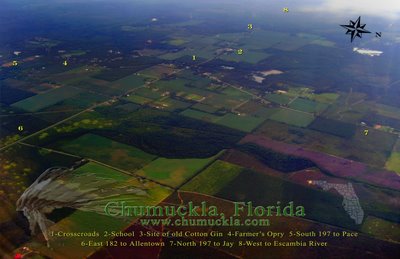 In a few weeks, Sammy's Crossroads Market will have a supply of the new CHUMUCKLA POSTCARD. This view is an aerial shot taken in August of this year. It was a lucky shot taken from a flight in a landing pattern for Pensacola. To get this lucky, you have to have A. Good Weather, B. Good time of day, C. The correct side of the plane, D. A window seat with no scratches on the window and E. The landing pattern has to take you on the right path. These postcards will be 5 1/2" x 8 1/2" and will sell for about a dollar. Get several to share!
Posted by BUZZ CREEK at 9/03/2006 No comments: Links to this post 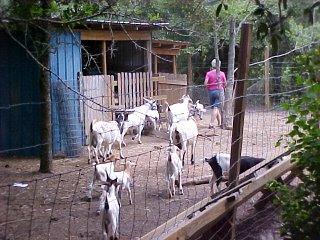 I expect there are a number of goat raising opertions in Chumuckla. This farm is a photo feature at the Chumuckla website. Country living is one of the things the hamlet of Chumuckla offers and with the open space available, goats and other livestock are suitable to the lifestyle. I hope to hear more about these small operations in future posts here on the blog. If you know of one, send the story and photos by email.
Posted by BUZZ CREEK at 9/03/2006 No comments: Links to this post