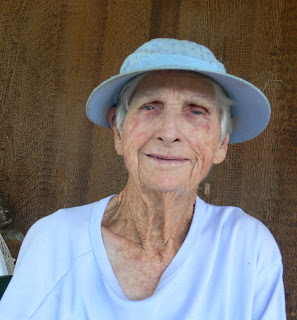 Norean Simmons
MRS. NOREAN SIMMONS1918-2008
Mrs. Norean Simmons, 90, of Chumuckla, passed away Sunday April 13, 2008. Mrs. Simmons was born in Dale County, Alabama and had resided in Chumuckla for the past 68 years.Mrs. Simmons was a member of the Chumuckla United Methodist Church. Mrs. Simmons is preceded in death by her parents Martin and Bessie Jones; her husband of 55 years M.A. Simmons; a daughter and son in law, Ruthie and Gerald Bostwick, and a son Charles Simmons.Mrs. Simmons is survived by a son, Ray (Jane) Simmons of Chumuckla; three daughters, Shirley (Billy) Hopkins of Chumuckla, Betty (Doug) Horton of Wallace, and Eddnie (Jack) Walther of Coldwater; eleven grandchildren, twenty great grandchildren, and three great great grandchildren.Funeral Services will be at 11:00 am on Wednesday, April 16, 2008, at the Chumuckla United Methodist Church with Rev. Clive Knight officiating. Burial will follow in the Elizabeth Chapel Methodist Church Cemetery with Lewis Funeral Home directing. The family will receive friends from 5 pm until 7 pm on Tuesday, April 15, 2008, at the Lewis Funeral Home, Pace Chapel, on West Spencerfield Road.
Published in the Pensacola News Journal on 4/15/2008.
Posted by Doug at 4/15/2008

Mrs. Simmons was one of the very best of Chumuckla. I really enjoyed the visit I had with her when I took this picture last year. vic