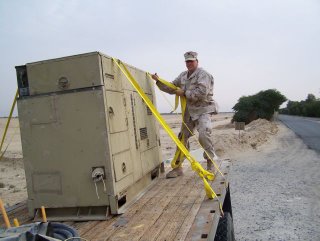 Matt Settle reports again. Matt is originally from Jay. Here are some of the photos. The text of his email is in the "comments" link just under this 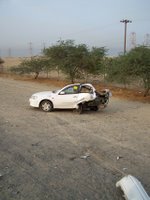 post. He seems to be doin OK . His assignment is in Kuwait. I wish we could get a few reports from some of our other ex-patriates from the Chumuckla community.
Posted by BUZZ CREEK at 11/12/2006

Well another week gone by and another week in the history books. Things here are about the same as last week. I would worry if they ever did change. Someone did tell me that we should be going home soon since the Democrats are now in control the nation. J I will believe that we I see it happen. On that note, my counter has 5 months, 24 days, 10 hours and 5 minutes until what I call F day or freedom day.

Well, not a whole lot has happened to talk about since last week. I still have not been able to catch up with my favorite mule since I last saw her. I am kind of worried about her since it is camping season around Kuwait. Some Kuwaiti now has here so he can ride her to the market on Fridays to get his groceries. Anyway, I did get to take some photos of the camping out in the desert. It is actually comical to think of it. They bring generators, lights, satellite dishes, 4-wheelers, large water tanks, and all kinds of other stuff. I guess it is no different than what I saw out in California where people drive out to the desert to camp and ride their ATV’s and dirt bikes. The accommodations are a little different and the Kuwaiti’s wait until the weather turns a little cooler. It is now in the mid 80’s for a high and in the high 60’s for a low. The weather is quite nice this time of year. But, I still would not camp in the desert like they do. Now, if I could bring my travel trailer with air conditioning, heater, bathroom, kitchen and satellite TV. I guess I maybe camp the same way they do around here. J

I am not sure if any of you have ever heard of Kuwaiti time. It is a new standard of time only used here in Kuwait. It is usually refers to how fast the Kuwaiti’s get things done. Most things in this country are done by the Third Country Nationals that are here to work. The Kuwaiti people can only be placed in manager or supervisory positions. So Kuwaiti time is when they get around to doing it and usually manes a couple of hours or day behind what we think it should be done. Case in point, we lost electrical power out at our watch location. We asked the Kuwaiti’s how long the power would be out. They said they didn’t know. We asked who did. They didn’t know. This went on for three days until one tow days ago they told us that it would be three days to one week. Well, here is the dilemma, do you wait on the Kuwaiti’s or go get a generator and run your own power. The problem with the generator is that we would need a 60 KW generator (very large) and we only carry 30 KW generators. Well to make a long story short, I found one at Camp Arifjan that the Army would lend to the Navy and wired it up to provide shore power. The power here is quite different than back in the US. We use 60 hertz, 120 volt power. Here in Kuwait they use 50 hertz, 240 volt power. The generator I got provides 460 volt, 3 phase power at 50 hertz. Very fun to wire up and make work. Thanks to all the great training that my Dad gave to me growing up, I can now use that training to make things happen. We now have AC, refrigerators and freezers back running after four days without power. The best thing is that the generators were free. The Supply Department still thinks we will get charged for them. I got another one about a month back and haven’t been charge yet. Hey you never know what you might be able to get away with if you only ask. I have always said the answer will always be no until you ask the question.

By the way, the ET’s (Electronics Technicians) that I work for work for put in a lot of long hours and a lot of hard work getting everything back in order. It is a great pleasure working with a great group of guys like that like I have working with me. They make it happen everyday.

On that note, I did have a little video put together of the ET’s our here in Kuwait. It is about 5 minutes long with lots of photos that I have taken over the 6 months we have been gone. The problem is that it is over 40 MB in size and will never make it out to you guys. I will find another way to maybe post it on the web and send out the link at a later time.

OK a new crash to grade. The traffic has lightened up a bit out on the highways so there have not been the wrecks that we were seeing. I guess with the weather being cooler, most people slow down a bit when they are traveling. Now remember the scoring goes something like this:

.5 Probable fatalities if someone was in the back seat. Remember Kuwaiti time? The balance drivers have the same watches as everyone else does.

1.5 1 for dislodging of both rear tires but not complete removal/.5 same for back bumper.

2 overall aesthetics/damage, I gave it two points for pushing the back tire under the front seat.

Well that is all I have for this week. As always, I hope everyone had a wonderful Veteran’s Day and remembered the ones out here that are making freedom “Free” for the rest of us. Please remember us in your thoughts and prayers.

Twin Towers’ construction certifiers say they should have easily withstood it:
http://www.prisonplanet.com/articles/november2004/121104easilywithstood.htm
USA Today interview with the last man out of the South Tower, pursued by a fireball:
http://www.usatoday.com/news/sept11/2001/12/19/usat-escape.htm
Janitor who heard explosions and escaped has testimony ignored by 9/11 whitewash commission:
http://www.americanfreepress.net/html/ignoring_9-11.html
Janitor starts speaking out about it and his apartment is burglarized, laptop stolen:
http://kurtnimmo.blogspot.com/2005/08/apartment-of-nine-eleven-hero-william_28.html
Firefighters tell of multiple explosions:
http://www.wnbc.com/news/1315651/detail.html
Eyewitnesses tell of explosions:
http://research.amnh.org/users/tyson/essays/TheHorrorTheHorror.html
Interview with another firefighter telling of explosions:
http://www.nytimes.com/packages/html/nyregion/20050812_WTC_GRAPHIC/Banaciski_Richard.txt
Firefighter saw “sparkles” (strobe lights on detonators?) before “collapse”:
http://www.nytimes.com/packages/html/nyregion/20050812_WTC_GRAPHIC/Fitzpatrick_Tom.txt
Other eyewitnesses talk of seeing/hearing explosions:
http://georgewashington.blogspot.com/2005/11/more-proof-911-inside-job-witnesses-to.html
Surviving eyewitnesses talk of multiple explosions there:
http://www.thememoryhole.org/911/veliz-bombs.htm
Cutter charge explosions clearly visible:
http://www.rense.com/general63/cutt.htm
The pyroclastic wave (that dust cloud that a second before was concrete) and how it wouldn’t be possible without explosives:
http://st12.startlogic.com/~xenonpup/physics/
Detailed description of the demolition of the Twin Towers:
http://gordonssite.tripod.com/id2.html
Freefall rate of “collapses” math:
http://www.911blimp.net/prf_FreeFallPhysics.shtml
More about their freefall rate “collapses”:
http://www.serendipity.li/wot/second_wave.htm
Video footage of the controlled demolition of the Twin Towers:
http://www.plaguepuppy.net/public_html/video%20archive/
Video footage of the controlled demolition of WTC # 7 building:
http://911research.wtc7.net/talks/wtc/videos.html
More of WTC # 7 controlled demolition:
http://www.wtc7.net/
Naudet brothers' video footage of the North Tower crash:
http://www.911blimp.net/vid_Naudet.shtml
Photos of the Pentagon’s lawn (look at these and see if you can tell me with a straight face that a jumbo jet crashed there):
http://www.911blimp.net/cached/HuntTheBoeing!.htm
More photos of this amazing lawn at the Pentagon:
http://cryptogon.com/docs/Introducing%20the%20amazing%20Penta-Lawn%202000!%20(9-11).htm
Very unconvincing fake “Osama” “confession” tape:
http://welfarestate.com/wtc/faketape/
More about the fake “Osama” tape:
http://www.whatreallyhappened.com/osamatape2.html
Fake “Mohammed Atta” “suicide” letter:
http://www.welfarestate.com/wtc/fake-letters.txt
Commercial pilots disagree with “official” 9/11 myth:
http://www.prisonplanet.com/september_11_us_government_accused.htm
More commercial jet pilots say “official” myth is impossible:
http://www.masternewmedia.org/2001/10/31/commercial_jet_pilots_analysis_of_the_twin_tower_attack.htm
Impossibility of cell phone calls from United 93:
http://www.physics911.net/cellphoneflight93.htm
More about the impossible cell phone calls:
http://www.globalresearch.ca/articles/CHO408B.html
Experiment proves cell phone calls were NOT possible from anywhere near the altitude the “official” myth has them at:
http://physics911.ca/org/modules/news/article.php?storyid=9
Fake Barbara Olson phone call:
http://www.vialls.com/lies911/lies.htm
Where the hell was the Air Force?
http://www.welfarestate.com/wtc/af-scramble.txt
More about the Air Force impotence question:
http://www.commondreams.org/views04/0331-11.htm
Sept. 10th 2001, Pentagon announces it is “missing” $2.3 trillion (now why do you think they picked THAT day to announce it? So it could be buried the next day by 9/11 news):
http://www.cbsnews.com/stories/2002/01/29/eveningnews/main325985.shtml
Unocal pipeline-through-Afghanistan plan:
http://www.csmonitor.com/2005/0513/p05s01-wosc.html
Unocal pipeline-through-Afghanistan plan mentioned:
http://thetyee.ca/Views/2006/05/19/OutOfAfghanistan
More on Unocal Afghan pipeline:
http://www.newscentralasia.com/modules.php?name=News&file=article&sid=1031
The attack on Afghanistan was planned in the summer of 2001, months before 9/11:
http://news.bbc.co.uk/2/hi/south_asia/1550366.stm
Pentagon deliberately misled 9/11 Commission:
http://www.globalresearch.ca/index.php?context=viewArticle&code=EGG20060802&articleId=2887
Evidence destruction by authorities and cover-up:
http://www.flcv.com/coverup.html/
9/11 whitewash Commission and NORAD day:
http://fromthewilderness.com/free/ww3/071204_final_fraud.shtml
The incredible fish tales of the 9/11 Commission examined:
http://www.globalresearch.ca/index.php?context=viewArticle&code=%20GR20051213&articleId=1478
Jeb Bush declares state of emergency 4 days before 9/11 for Florida, saying it will help respond to terrorism:
http://www.eionews.addr.com/psyops/news/jebknew.htm
Steel debris removal from Ground Zero, destruction of evidence:
http://911research.wtc7.net/wtc/groundzero/cleanup.html
Over two hundred incriminating bits of 9/11 evidence shown in the mainstream media:
http://thewebfairy.com/killtown/911smokingguns.html
Tracking the “hijackers”:
http://www.welfarestate.com/911/
“Hijacker” patsies:
http://911review.org/Wiki/HijackersPatsies.shtml
“Hijackers” receiving flight training at Pensacola Naval Air Station:
http://www.scoop.co.nz/stories/HL0208/S00085.htm
Several accused "hijackers" still alive and well, wondering why they are accused:
http://news.bbc.co.uk/2/hi/middle_east/1559151.stm
Yet the F.B.I. insists that the people it claims were the "hijackers" really were the "hijackers":
http://www.prisonplanet.com/fbi_denies_mix_up_of_911_terrorists.htm
No Arabs on Flight 77:
http://www.sierratimes.com/03/07/02/article_tro.htm
Thirty experts say “official” 9/11 myth impossible:
http://911fraud.blogspot.com/2005/06/us-governments-offical-911-story-is.html
“Al Qaeda” website tracks back to Maryland:
http://www.whatreallyhappened.com/alqmaryland.html
Al Qaeda videos uploaded from U.S. government website:
http://www.prisonplanet.com/articles/july2004/140704governmentwebsite.htm
Operation: Northwoods, a plan for a false-flag “terror” attack to be blamed on Castro to use it as a pretext for America to invade Cuba, thankfully not approved by Kennedy back in 1962 but was approved by the Joint Chiefs of Staff and sent to his desk:
http://www.prisonplanet.com/us_terror_plan_cuba_invasion_pretext.html